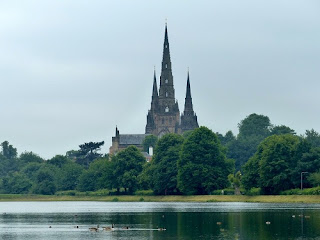 My brother-in-law lives in Lichfield north of Birmingham. The walk into Lichfield along the side of Stowe Pool is delightful.
Posted by Roger G3XBM at 14:33 No comments:

Email ThisBlogThis!Share to TwitterShare to FacebookShare to Pinterest
Labels: lichfield 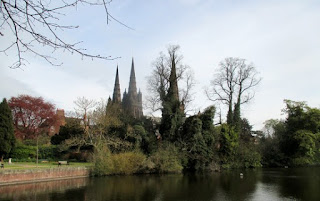 We were in Lichfield for my brother-in-law's 70th birthday party, so I was not able to update the blogs. It was a good family get-together. I guess it won't be too long before some of us meet for funerals! It will be some years before there is a round of grandchildren's weddings. For some of these we may be around, but it is unlikely we'll see them all get married. Still, this is how it has always been since time began.

Lichfield is a small city to the north of Birmingham. It has a very nice cathedral with three spires. Unusually, the cathedral is made in red sandstone. It has some fine carvings over the entrance. Lichfield itself is charming with many fine old buildings and a pedestrianised centre. There are 2 large lakes near the cathedral. I guess at one time these were stocked with fish for monks nearby?
Posted by Roger G3XBM at 07:56 No comments: