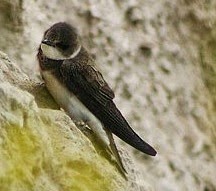 Spring has (almost) sprung! There have now been several sightings of 20+ sand martins in South Devon. These are among the first of the migrants to return. They are the smallest hirundine.  Sand martins have dark brown upper parts and they winter in Africa.  In recent years sand martin numbers have plummeted and they are now on the RSPB's "amber" list.  There are estimated to be 54,000-174,000 nests in the UK. This sounds a lot, but numbers are dropping because of droughts on their migration routes in some years.

By the month end we should have house martins and swallows back in Devon who will have flown 6000 miles to be here in the UK again. When the swallows return here in East Anglia you know all is still well with the world:. they have been making this journey for many thousands , if not millions, of years. Most return to the very same nests they used last summer, if they can. I find the return of the martins, swallows and swifts a real joy. It makes me glad to be alive.