Wherever there is a gap more houses get built. These cater for the well healed and rarely for ordinary workers. For example, the space in the photo has recently been built on. At one time it was a pub carpark. 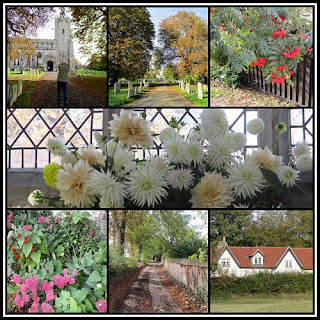 Yesterday, we did a walk in the autumn sunshine around part of our village. It has grown a lot since we moved here in 1975, but still retains a "village" feel. Population is now over 6000.
Posted by Roger G3XBM at 08:09 No comments:

This weekend we have our "Burwell at Large" exhibition where village groups have a chance to showcase themselves.

Burwell is a thriving village with plenty to interest people. One example was the local tower bell ringers who brought along a "mobile belfry".

There are groups in our village covering a very wide range of interests.

Email ThisBlogThis!Share to TwitterShare to FacebookShare to Pinterest
Labels: burwell

We went for a brief walk this afternoon up near the "cock-up" bridge on Burwell Lode. We saw several birds including some swallows, a tern and 2 mute swans as well as these fine highland cattle with big horns.

Although the fens are bleak, they have a certain beauty, especially the wild fen skies. Burwell Fen is now owned by the National Trust.
Posted by Roger G3XBM at 08:55 No comments:

Email ThisBlogThis!Share to TwitterShare to FacebookShare to Pinterest
Labels: burwell

We live in the last bungalow on the left overlooking the restored windmill. The windmill is nearly 200 years old. Today we have had a rare sunny day, although the rest of the week looks rainy. We are lucky to have a nice spot.

The museum, of which the windmill is a just a small part, goes on and on. It must be one of the very best local museums in the whole country. It is open from Easter to late October on Thursdays, Sundays and Bank Holidays. If you visit, you may be surprised by what is there.


As some of you may already know, the excellent local museum and windmill is having a new entrance and shop. Today it is being erected. 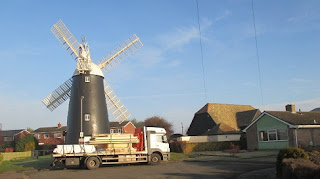 If you have not been along, please visit after Easter on a Thursday, Sunday or Bank Holiday. You are likely to be surprised by how extensive it is and by the wide variety of it contents. It truly exceeds expectations and must be one of the best local museums in the whole UK.
Posted by Roger G3XBM at 02:46 No comments: 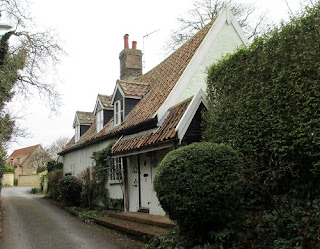 Although our village (Burwell, Cambs, UK) has grown a lot in recent years, it still has some lovely cottages like this one.  Some parts of our church are around 1000 years old and the oldest house dates from around 1200AD. I suspect this cottage dates from the 1700s, so is quite new!
Posted by Roger G3XBM at 03:17 No comments: 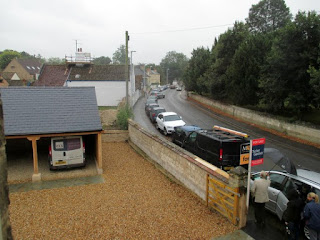 For over 40 years there has been a grade 2 listed former farmhouse empty in our village. Slowly it was going to ruin.  Over the last 2 years it has been extensively renovated and is now for sale. Today was an "open house" so we went to have a look around. Someone will like it and buy it. It is on the market for just under £1M. It would make a good Bed &amp; Breakfast house or large family home. It is just across the road from the church. This picture shows the view from one of the bedrooms.
Posted by Roger G3XBM at 04:10 No comments: 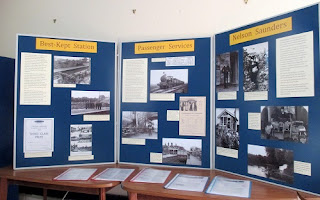 Our local museum has an exhibition about railways in and around Burwell. Passenger traffic ended in the early 1960s but freight traffic limped on for a few more years. They also had a video of the branch line to Mildenhall from Cambridge which went through Burwell.
Posted by Roger G3XBM at 11:01 No comments:

We have a friend who has been to visit me most months. She lives in a VERY old house. Today we walked to her house for tea and scones.

This roof, to the rear of her house, is a real problem in heavy rain as gallons and gallons of water flows off it, causing her cellar to flood. She has taken measures to minimise the problems but she is always nervous with heavy rain around
Posted by Roger G3XBM at 09:52 No comments:

This is usually held the next weekend in June each year, but it was changed to coincide with the Queen's 90th birthday celebrations. Although thundery showers were threatened all afternoon, they kept off. My wife ran the cake stall, as she does most years. It is usually a good chance to meet village people not seen for a while.
Posted by Roger G3XBM at 08:52 No comments:

Just been to an excellent talk at Burwell Museum on "Railways in Burwell" by Steve Crane. It was well attended.

More talks - see the Museum's website at http://www.burwellmuseum.org.uk/ .
Posted by Roger G3XBM at 08:09 No comments:

Talks are followed by tea and biscuits.   Free with museum admission. No admission charge for season ticket holders, Friends and museum volunteers.
Posted by Roger G3XBM at 02:07 No comments: 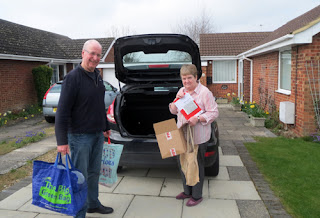 Our best man 45 years ago (we married in 1971) has left after a few days with us. He is a good friend and guest and we always pick up as if we saw each other just yesterday. He live 200 miles away and it is often 6 months or more since we last met.
Posted by Roger G3XBM at 04:00 No comments:

As it is a bank holiday here in the UK, our local museum and windmill in Burwell, Cambs are open.

There is an Easter Egg Hunt for the little ones, but there is loads here always to interest youngsters. Our grandchildren love it.

We can see the windmill and museum from our kitchen and lounge. Ours is the bungalow on the left in the photo. As you can see, we are very close!

It is a very fine museum and windmill.
Posted by Roger G3XBM at 05:00 No comments:

Getting ready for summer?

As we walked past today, it looks like the Burwell cricket team was getting ready for the new season.

The Tan House is the biggest house in the village and was once the home of Francis Pimm who was at one time Foreign Secretary in the government.
Posted by Roger G3XBM at 11:12 No comments:

As one of the volunteers was unable to attend today, my wife and I shared the 11-2pm slot on the kiosk at our local museum today. The museum is excellent.

As we live right next door it is easy for us to pop across if we are free. All our grandchildren love it and want to go every time they stay with us. 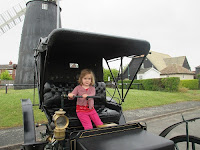 Burwell Museum now includes the restored windmill. Entirely manned by volunteers it is a truly exceptional museum and there is so much to see and do. Our grandchildren love going there. Luckily we live right opposite the windmill and can see it when we eat our meals!

Our local Burwell Museum has been undergoing a facelift over the winter months. There is now a brand new cafe and shop and many of the exhibits have been changed. It really is superb and well worth a visit.

The visit also allows a good look around the fully restored windmill. The windmill is literally over our garden wall. Quite a few TV programmes have used the windmill recently. Our bungalow has been on national TV at least once, albeit for just a few seconds!
Posted by Roger G3XBM at 08:37 No comments:

We get very little snow over here these days. Today we had the first real snow of the winter, although amounts were small by the standards elsewhere in the UK. This photo was taken this morning around breakfast time.

UPDATE 1525z:  All our snow has now gone. Winters over here are far less severe than they used to be.  Global warming? If we get even a few days with snow on the ground is now the exception. If the wolrd is warming, it could be critical later in the century. The evidence does seem to be pointing to a warming world, although the increase has perhaps stalled in the last 10 years. The sooner we stop subsidising fossil fuels and adapt to renewable energy sources the better.

At one time we could count on at least a couple of weeks of real snow. Last winter we only had a couple of mild frosts. I am not complaining, but if the world
Posted by Roger G3XBM at 03:40 No comments: