It seems ages since I posted to this blog. At the weekend we did a delightful walk at Ely. The River Ouse runs through it and Ely looks good even when the weather is dull!
Posted by Roger G3XBM at 10:57 No comments:

Email ThisBlogThis!Share to TwitterShare to FacebookShare to Pinterest
Labels: ely

For the last few days, my wife has had an old college friend staying with us.

We visited a few local National Trust properties and managed one meal on the patio before the weather broke.

Yesterday we went to Ely Cathedral and ate in the Almonry, which is very close to the cathedral and also very old. Parts of the Almonry date back to the 13th century.
Posted by Roger G3XBM at 12:50 No comments:

Email ThisBlogThis!Share to TwitterShare to FacebookShare to Pinterest
Labels: ely

This morning the sun shone.

As I write this, we have hail again!

On the walk we saw baby moorhens, swallows, house martins, a blackcap, a chiffchaff and a buzzard among the many. It was a shortish walk but tired me out. It is years since I was last in this village near Ely.

The name "Witchford" comes from witches. Not far away is the village of "Coveney", which must also have past connections with witchcraft centuries back.
Posted by Roger G3XBM at 09:52 No comments:

As my physio sessions for my stroke draw to a close in Ely I have now been recommended "on referral" to the Newmarket Leisure Centre for further work on balance and stamina. Being referred, one gets discounted rates for the 12 weeks of group sessions twice a week for 30 minutes each. Hopefully this will help my recovery.

I  am not really a "gym" sort of person, but I am game for anything which will help me recover my "old" self.
Posted by Roger G3XBM at 07:24 No comments:

Not far from Ely cathedral is located this cannon, presented to the city in 1860 by Queen Victoria. The cannon is Russian and it was captured during the Crimean War.

Do not forget that Crimea was fought over a long time ago. The recent Russian take-over of Crimea is really nothing new.   I just wish some legal framework could be created acceptable to Ukraine, Russia, the EU and the USA , remembering Crimea was once part of Russia until given to Ukraine in the days of the USSR. Since those days the politics of Ukraine has altered a lot.  Crimea has been home of the Russian Black Sea fleet for very many years. Our stance in the west on Crimea is a little odd when most who live there are ethnic Russians.
Posted by Roger G3XBM at 10:58 No comments: 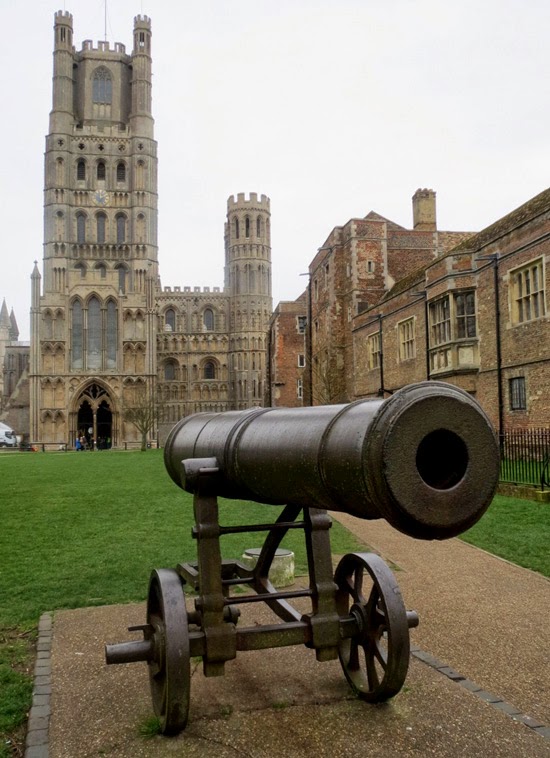 Every week for the next 8 weeks I am attending physio (for my stroke) at the Prince of Wales hospital in the city of Ely.  This was once an RAF hospital.

Ely is a delightful place with a cathedral 1300 years old (LHS). My wife walks into town during my sessions. As a local parishoner she gets free entry too. Down by the river Ouse is lovely too and the market , although small, is delightful.

Years ago, during WW2, my dad (see RHS) had his appendix removed in the old Bishop's Palace in Ely (RHS).  He flew Lancaster bombers (see below) in the Pathfinders and was very lucky to survive the war. He crash landed once on the way home. He rarely spoke of his WW2 experiences: I think he did not really like the idea of helping to kill innocent civilians. He was much happier living his simple rural life in Devon after the war years . Wars are so bad for everyone on all sides. It humbles me to realise how young he was in those days: 20-26yrs old only. In the last months of the war he had a young child too. I never realised how brave he was until it was too late to tell him.

The Bishop's Palace,which dates back to the 15th century, was a Sue Ryder home, but since 2012 has been the home for the Kings School's 6th form.

Nearly 4 years ago we had our first little grandson. Since then we have been blessed with another grandson and a little granddaughter.  It is hard to explain just how powerful a bond there is between grandparents and grandchildren: in some ways it is even stronger than the bond to our own children. Today we enjoyed the simple pleasures of walking around Ely with its cathedral with our eldest grandson, feeding the ducks and walking in the woods and playing hide-and-seek between the trees. We know that all too soon he and the other grandchildren will grow older and away from us. For now we are enjoying every single moment.
Posted by Roger G3XBM at 11:48 No comments: