In shirt sleeves, I cut my front lawn earlier. After lunch, I expect to cut the rear lawn. For February, it is extremely mild. It feels like a late spring day! These are the first cuts this year.
Posted by Roger G3XBM at 05:12 No comments:

At least 3 people were cutting their grass today, even though it was Dec 29th!  We've had the mildest December I can ever recall.

OK, things could change to heavy snow very quickly, but if things do continue as they are, I shall be cutting our lawns all winter, which would be so different from normal.

No, so far, the extremely mild weather continues. Yesterday I did some work in the garden in my shirt sleeves.  It was not even cold!
Posted by Roger G3XBM at 13:41 No comments:

We are now clearly in autumn and the leaves are starting to fall. Today, I cut our front lawn (rear later all being well) but the intervals between cuts is lengthening as the grass is growing less. One, maybe two, more cuts and that should be it until the spring arrives. I usually give it a small tidy-up if needed on a dry winter's day.

The first cut of spring is usually March. The grass grows very slowly in winter. Unless we get a really cold snap, I don't think the growing totally stops. By January I get frustrated as the grass starts to look untidy. It always looks better after being cut. In the meantime, nights draw in and we have the pleasures of cosy nights in. There is something good in every season.

As Melanie Reid said in The Times on Saturday (she is tetraplegic since a riding accident in April 2010) there are those that live and those that live in fear. We are not in control, despite our best efforts, so let us all try to be with those who live and embrace all life.

Another post-stroke goal met. Lis (my wife) was out at her choir and I was determined to get the back lawn cut. Last time, Lis did about 70% and I just cut a few strips. Well, with 4 short breaks and battling my giddiness, I managed to cut the whole back lawn on my own. It was pretty knackering but I managed it! The lawn is about 60 feet x 25 feet average: it is not a small lawn.

Next  target: the front lawn, which is 80 feet long but narrower!
Posted by Roger G3XBM at 07:26 No comments: 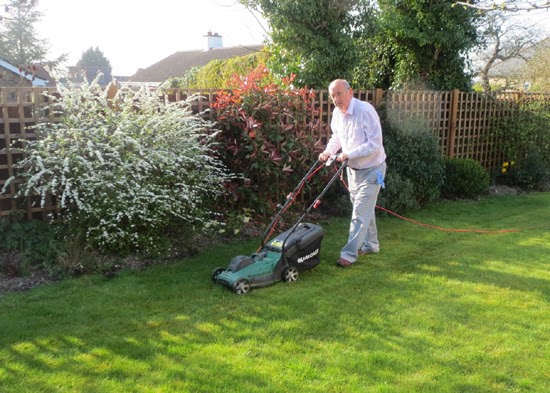 Well, my balance, walking and general stamina must be improving as today I cut about 40% of the rear lawn. Lis did the rest, but I was not totally exhausted, as I was last time.  I could probably have done the whole lawn with a few breaks. 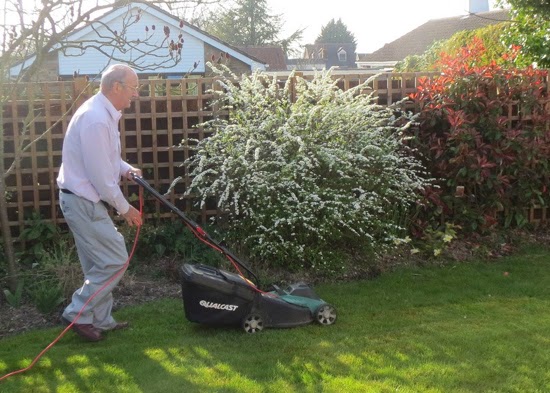 Today I still feel a bit sick inside and giddy but definitely somewhat better. Also, I have taken NO pills today so far.
Posted by Roger G3XBM at 10:01 No comments:

Feb 26th 2012 and it now feels as if spring has arrived already. After a week or so of very cold snowy days we have the garden springing back to life with bulbs pushing through, the birds singing and looking at nest sites and the grass growing. This morning I even cut my front lawn for the first time this year - just a trim to even out the growth.  March 1st marks the first official day of spring according to the Met Office, so not long now.
Posted by Roger G3XBM at 05:06 No comments: