From my own limited experience, I know cyber attacks are a real threat.

According to the BBC the UK Foreign Secretary is to warn Russia that the UK will retaliate if the Russians are guilty of cyber attacks that threaten national security. I am sure most governments have a "dirty tricks" department. Some get caught. It is the nature of 21st century warfare.

Today appears to be the first day in a while when the Russians have not been looking at this blog. Legitimate views are welcomed, but hacking probes are not.  I suspect many are the latter.

Email ThisBlogThis!Share to TwitterShare to FacebookShare to Pinterest
Labels: russia

Yesterday numbers of visitors were up on a couple of my blogs. Now, I welcome anyone from any part of the planet, but it is strange how numbers seem to double and most of these are from Russia.  This is a pattern I have seen before and I know others have seen similar.

It looks very suspicious to me like they are probing for vulnerable sites to hack with malicious intent. Sorry but I think my content is pretty innocuous!

I am no expert on Middle East politics but this move by Russia surprised us all. They still keep their bases in the region, but I think no-one (except maybe the US military?) was expecting this. Does it make peace in the country more (or less) possible? I only hope that all players work towards a peaceful and fair outcome for all in this war-torn land. The people of Syria have suffered too much.
Posted by Roger G3XBM at 02:06 No comments:

Well, I have mixed feelings over these. It would be much better if Russia and the USA would agree who the real enemy is and sort things out. This is the first Russian air action since WW2 outside of the old USSR I believe. Russia clearly wants to be seen in the Middle East. It is also looking to Syria for forward bases in the region.
Posted by Roger G3XBM at 07:29 No comments:

So what exactly is Mr Putin up to?

The best way to win friends around the world is to create a truly free and open society, to respect the views of all, to uphold the law created via a truly democratic process and not to pretend Russia is the USSR and in the 1950s.

The latest news from Moscow paints Russia as a nasty place. Whereas in the 1980s I wanted to see it, I have zero wish to go there now. It smacks of corruption and the KGB. Mr Putin, please join us and put the past behind you.

The world wants to be the friend of a free and open Russia.
Posted by Roger G3XBM at 03:06 No comments: 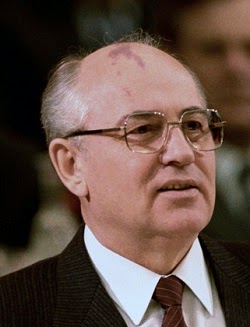 Mikhail Gorbachev has warned that the world is on the brink of a new cold war with Russia. He now looks much older - not at all the fairly youthful leader we all came to like (LHS). Somehow I feel he is correct as the current leader of Russia seems to have got the date wrong.  Someone needs to explain to him that the USSR went a long time ago.

It sounds like the stuff of spy novels from many years ago, but the Swedish military may indeed be hunting a Russian sub in the waters not far from Stockholm. Neutral Sweden? Why? It beggars belief that the Russians would want to bother with Sweden.

If they do this with Sweden, you can only imagine the spying going on between the Russians and the USA for example.

Russia - the cold war ended a nearly a quarter of a century back! This is the 21st century, remember? Major nations try to behave like adults nowadays. It saddens me to think some major world players still play war games. I expect the USA and the UK are just as bad.
Posted by Roger G3XBM at 11:57 No comments:

The first spacewalk - a near disaster

So the truth can now be revealed that the first ever space walk by the Russians in 1965 so very nearly ended in tragedy. At the time we all knew nothing about it because of the propaganda war between the USSR and the USA over space exploration. Now the 80 year old, who was the first human to walk in space, reveals all.
Posted by Roger G3XBM at 03:33 No comments:

I see the EU and the USA have increased sanctions against Russia. Russia claims these will hurt the west too. They may be right, but Russia has been too lax over events in Eastern Ukraine with its support for the separatists.By now, a thorough investigation into the MH17 jet should have been held, but still the Russians are prevaricating.  By doing so, they are as much as admitting their complicity.

This not East versus West.   At present it is Russia versus the whole world.

I agree with greater sanctions if it helps Russia to see how to regain its rightful place at the world's top table as a truly democratic nation. Currently Russia is doing itself no favours at all and thinks it still lives in a pre-1989 world. This is 2014 - times have moved on.
Posted by Roger G3XBM at 14:05 No comments:

Time is marching on and still no proper investigations have been carried out. The separatists and Russia are looking ever more guilty by being ever more obstructive. If  they were guiltless they would have sealed the area and let in international observers right away. All the evidence now suggests they are trying to cover tracks.
Posted by Roger G3XBM at 06:53 No comments:

If Russia is innocent then why is it not doing far more to help international investigators gain full, unhindered, access to the crash site? Why am I suspicious? If they have nothing to hide why all the secrecy?  All the Russian actions appear to show ever more complicity.

It would be better for Russia to "come clean" and admit that Russian backed separatists shot the plane down. Admit Russia was unable to control rebel factions and then move on. As it is, Russia is likely to face tougher sanctions and yet more isolation in the international community. Both actions are not in Russia's best interests.

It would be in Russia's best interest to agree a permanent downing of weapons in Ukraine and to hold elections to decide the future of Russian speaking regions of Ukraine, perhaps under UN control (of elections)? If some parts want to move to Russia, then let them go.  Bombs and bullets do not solve such conflicts.

Russia is getting upset by NATO "cold war" behaviour and sanctions - well tough!  Reduce your 40000 troops on Russia's border with Ukraine then.

The small scale NATO moves are about re-assurance whereas Russian moves are pure threat to a free and independent nation.   Cool it or expect yet more sanctions.  You should have to pay for your intimidating behaviour.

Russian actions belong back in the Cold War days and have no place in a free and democratic world. Russia, act like a grown up and stop throwing your toys out of your pram. I know there are always at least 2 sides to any dispute but Russian actions are plain wrong. This is not the way to air you grievances.

Russia is a great nation that deserves to be treated respectfully, but only if it behaves like an adult nation. Russia is behaving like a spoiled child at present over eastern Ukraine.

I fear for the future of eastern Ukraine: The Russian "inner circle" is still living in the 1970s. The age of the USSR is long gone!
Posted by Roger G3XBM at 04:40 No comments:

Is war in Ukraine a certainty?

No, but the signs are ominous.

As in all conflicts, it depends on who you are listening to. The Russians believe they are in the right to send in troops if necessary to bring stability to the eastern cities. The Ukrainians believe Russian special forces are already at work destabilising the east of Ukraine. NATO is watching in the wings hopng the Russians will calm things, especially with the threat of more economic sanctions. Russia is already feeling economic pain.

I don't much like Mr Putin's stance. He clearly wants to re-create the Soviet Union in some form and is showing the world his flexed muscles. He is ex-KGB and doesn't sound a nice man. Maybe I am seeing a biassed view of the man? Could be.

This could all get out of hand so easily and lead to a major European war, or worse. At all costs, this conflict has to be defused and peace allowed to flourish.

And of course the Russian trump card is gas supply to Europe. Ultimately, the west wants Russian gas and will resist too much clout against Russia so they don't turn this off. On the other hand, the export of gas must help the Russian economy. See http://en.ria.ru/infographics/20090609/155206402 .

Edward Snowden and the Russian/USA discussions?

This evening, I read that Edward Snowden, the US contractor who has leaked details of US spying activities, has (reportedly) asked for political asylum in Russia and that President Putin has said,

"If [Snowden] wants to go somewhere and there are those who would take him, he is welcome to do so," and  "If he wants to stay here, there is one condition: He must stop his activities aimed at inflicting damage on our American partners, no matter how strange it may sound coming from my lips."

Now, to my suspicious mind this sounds a very strange comment from a Russian head of state. One can only imagine the behind-the-scenes contacts between the US and Russian governments that prompted this utterance. We all know that the USA spies on Russia and that Russia spies on the USA, so why this apparent support for the USA?