Good news for a change

We seem to be fed lots of bad news (I guess this makes papers sell) but tend to not hear about good news often. So, we end up thinking the world is all gloom and doom. In actual fact the good news far outweighs the bad. So let me bring you some good news for a change.

Today we heard that a well known UK singer had won substantial damages from the BBC. Several years ago the police raided his house searching for evidence of child abuse and the BBC "in the public interest" hired a helicopter to film it all.  He was not even charged.

Now, if such an accused is found guilty the full force of the law will fall on him or her. If innocent, their reputation will be tarnished for ever. There are several occasions when reputations have been ruined without due cause.

The answer is simple: people are innocent and anonymous until proved guilty in a court of law. There is no place for innocent people being judged by the mob and the press. Saying such intrusions are, "in the public interest" is wholly wrong in my view. It is gutter journalism at its very worst.

This website was found by accident. It has some interesting videos. It is worth checking out.

Unsurprisingly, there was widespread condemnation of the World Health Organisation making Zimbabwe's Robert Mugabe their goodwill ambassador. This appointment has now been revoked.

Email ThisBlogThis!Share to TwitterShare to FacebookShare to Pinterest
Labels: bbc, mugabe, who

According to the BBC a leading UK museum has "lost" a Cartier ring worth £750000. Amazing.

The BBC was made to disclose (by the government) the salaries of their top stars and presenters. Quite a few earn more than £500k a year and some over £2M a year! Sorry, but I think this is insane and immoral: I am sure there are people who could do as good a job on much lower salaries.  BBC? Big Bangs Corporation or Big Bonkers Corporation.

Remember we pay for these people with our licence fees. Shame!

This online encyclopaedia is one of the most famous in the world. Access to it is a sign of a nation being at one with itself and one that trusts its citizens. Countries that ban access to it usually have something to hide.
Posted by Roger G3XBM at 07:17 No comments:

Way back in 1957 the BBC ran a spoof Panorama programme about the spaghetti harvest. The programme was narrated by Richard Dimbleby. It was the first time, I think, that TV had been used to pull an April 1st stunt.
Posted by Roger G3XBM at 12:39 No comments:

Who doesn’t love CBeebies? Kids love it, and so do parents. BBC children’s programmes, like CBeebies, allow us those precious few minutes in a day to make a cup of tea. And we can trust that our kids are watching quality TV.

But children's TV as we know it is under threat. It's being reported that the government plans to take money away from the BBC’s children’s programmes. They want to give money-making channels a chance to compete for children’s shows.

Please can you sign the petition to save BBC children's television?  See  http://38d.gs/21NJSjN

Personally  I have a problem with children being bombarded with adverts for things they do not need. The BBC is good as it is. There is a danger our government will ruin it.  Save it!
Posted by Roger G3XBM at 08:49 No comments:

Call me a grumpy old man, but I get appalled by the BBC's weak attempts at local regional accents. It really grates on me. It is not just the BBC. Why can't they get rural accents right? You can always tell a BBC Radio 4 drama a mile off! I guess they assume most listeners won't notice or care.

I watched the film "Warhorse" . It was appalling: a Dartmoor, Devon village was actually filmed in Wiltshire I think. It looked nothing like Devon. The Devon accents were very very bad. No excuses: they spend millions making these films and need to get the basics right.

No, get the accents right please!
Posted by Roger G3XBM at 04:44 No comments:

Thank goodness no-one was sitting on this patio when it disappeared into a 300 foot mine shaft!
Posted by Roger G3XBM at 08:56 No comments:

Pacers: UK trains that should have gone long ago

According to the BBC website, these diesel trains were stop-gap and should have been replaced long ago.


The image below is located on the BBC site and NOT on this blog. 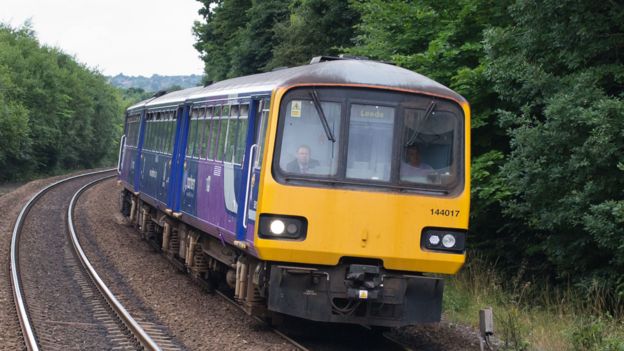 Next year, the BBC will no longer use the Met Office for its weather forecasts. I have no idea who they will use instead. I very much doubt the forecasts will be any better, but at least they will be able to buy better seaweed.
Posted by Roger G3XBM at 06:54 No comments:

Sometimes it is hard to separate fact and fiction. The recent US TV series "Homeland" was about the dynamics between the USA and Al Qaeda. Today we hear news that the latter's leader has been killed. in Pakistan. This is very much like the latest series.

The BBC seems to have fixed its glitch with market data. Their main news page is again showing this information. For a few days it was either missing or wrong.
Posted by Roger G3XBM at 06:40 No comments:

Palestine - Israel talks, where next?

Peace talks seem to be deadlocked, yet again, begging the question of just how to get these 2 sides around a single table involved in meaningful discussions on a long term peace settlement.

The sad thing is both sides need this but seem unable to take the bold steps required, especially Israel. The Palestinians are not blame free either. Think how history will remember you if/when you succeed.

Please, cast the past aside and make real peace for once - you know it makes sense. Years of war and  uncertainty does no-one any good. Think about all the benefits a good peace treaty would bring.
Posted by Roger G3XBM at 10:55 No comments:

In no way do I condone sexual abuse of anyone. However, I'm puzzled by the media frenzy over Jimmy Savile, the UK DJ and TV presenter, over what he might (or might not)  have done to girls backstage in his dressing room.  If his actions were so vile and disgusting then why were these not challenged long ago when he was alive and able to face justice, and defend himself?  Some say he was a powerful person and people would have found it hard to fight him in the courts. Sorry, but I don't buy this: if enough people felt strongly then he would have been brought to justice. He is dead and gone now.

There must be other TV presenters and DJs who behaved in a similar way to Savile and I can imagine some of these people not sleeping at night waiting for the next expose.